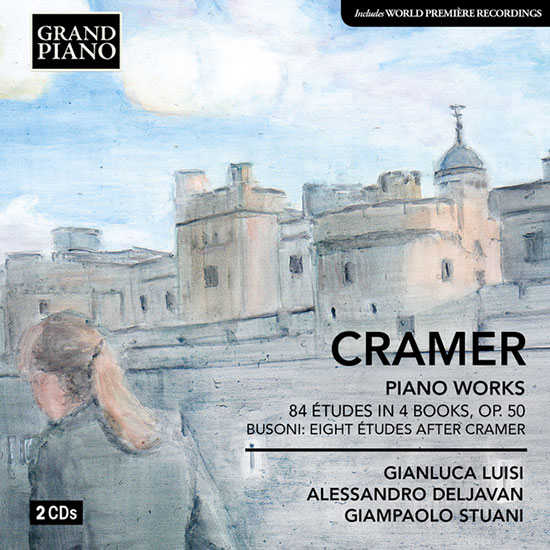 An album devoted to Cramer’s Studies, which for two hundred years now have provided generations of pianists with technical and stylistic work-outs, is something very unusual. Like the one hundred studies in Clementi’s Gradus ad Parnassum, the 84 Studies by Johann Baptist Cramer (1771-1858), have always been confined to the realm of teaching, a monument to piano technique known only to students of the instrument. This first complete survey has not come completely out of the blue however. In recent years the music world has shown a certain interest in the piano studies repertoire, as demonstrated by the work of Alessandro Marangoni, who has single-handedly recorded all one hundred pieces in Clementi’s Gradus. For the four books of Cramer’s Opp. 30 and 40, published in 1804 and 1810 respectively (and which were the model used by Clementi for Gradus), Gianluca Luisi has chosen to share the workload with his colleagues Alessandro Deljavan and Giampaolo Stuani, and to include as a bonus the eight Cramer studies reworked in 1897 along late Romantic lines by Ferruccio Busoni.

In the early days of his career Luisi, from the Italian city of Pescara, made a name for himself as a performer of Bach, although he has recently added Liszt’s Années de pèlerinage (Year II) and Rigoletto paraphrase to his discography. This love of Bach is key to understanding both his motivation to record the Cramer and the approach chosen by the three pianists for what might at first sight seem a rather dry repertoire, for Bach’s music, specifically The Well-tempered Clavier, which Cramer, like almost all pianists of his generation (including Beethoven), knew well, underpins the Studies. Reading between the lines of the repetitive technical formulas that run the length and breadth of these studies – as little known to audiences as they are well known to students – we find the Bachian design of the four-part chorale, which forms, to quote Piero Rattalino, a kind of “hidden framework”. This structure is most evident in studies such as Nos.72 and 41, the second of which has all the hallmarks of an organ work.

Onto the underlying chorale Cramer grafts melodic patterns in which legato and cantabile playing are always given pride of place, in line with Classical aesthetics. We are therefore a long way away here from the transcendental virtuosity that Chopin and Liszt would be experimenting with a few years later: Cramer always viewed the new, Romantic music with suspicion, despite living until the mid-nineteenth century. The Bach connection also explains why the performances given here by Luisi, Deljavan and Stuani are so neutral and “polite”, while all the time retaining the cantabile element so central to Cramer’s writing. The Studies are classically laid out on clear and rational lines, which respond well to this robust and clear-cut approach. We know from the recording he made a few years ago of The Well-tempered Clavier that Luisi is a pianist more interested in exploring form and structure than tonal and dynamic subtleties. Deljavan and Stuani are on the same wavelength and the result is a survey of remarkable unity of purpose and achievement, measured but not severe, marked throughout by high-class craftsmanship.

Pianists (or perhaps listeners) who are familiar with studies by Czerny or Hanon will be pleasantly surprised by Cramer’s, which are short, graceful, and expressive works… each [pianist] treats the pieces as interesting, expressive music …they add brilliant performances of Busoni’s hyper-virtuosic treatments of Cramer. The performances are uniformly virtuosic and the sound is fine.

Cramer’s ‘studio’ cross the boundary between ‘teaching pieces’ and works of art. Beethoven and Schumann famously admired them: Busoni issued an edition of these Études and wrote a number of additional examples in the same style -which are generously included on the present CD.

Nicolas Temperley has suggested that Cramer’s studies were by far his most ‘influential’ work. They are historically, as well as musically important. He writes that they ‘were the first of their kind: in fact, the word ‘study’ (étude) appears to have acquired its modern meaning through them…’ it was the first major collection of (high grade) teaching pieces for the pianoforte.

Cramer’s studies are not simply methodological exercises which would have had a tendency to be as dry as dust. They are imbued with well-considered formal characteristics and subject matter which are to be approached as part and parcel of the technical problems encountered. It has been suggested that only by a detailed examination of their internal structures will the qualities of beauty and interest be laid bare. It is unlikely that most listeners of these pieces will be able to devote this amount of time and effort to their exploration.

The great nineteenth century pianist Edward Dannreuther has described this collection of studies well: ‘this is of classical value for its intimate combination of significant musical ideas with the most instructive mechanical passages.’

Stylistically, it is fair to suggest that Cramer’s Études inhabit the sound-world of Mozart and Scarlatti with frequent nods to Bach. However, his great achievement is that he has managed to fuse a conservative playing style with the latest developments in piano performance made possible by the mechanical advance in instrument design.

I thoroughly enjoyed being introduced to the entire run of Cramer’s 84 studies. In fact, it is the first time that they have been available in their entirety. They are played by three pianists who bring a huge talent to the performance of these important works. However, the main impression I get from listening to these Études is the inordinate enthusiasm and understanding that comes across in the performance. It would be easy, I guess, for the technical brilliance of many these studies to overshadow the poetical element that inhabits much of this music.

The sound quality is impressive and allows the listener the maximum opportunity to enjoy every moment of this music.

…I am sure that this double-CD will appeal strongly to all piano music enthusiasts. Whatever their usual fare, these Études represent a major stage in the development of piano technique as we have come to understand it in the music of Chopin, Liszt and other romantic pianists.

Now little more than a name in reference books, Johann Baptist Cramer was one of the leading concert pianists during a career that began in the late 18th century. Born in Mannheim of German and French parents, his long life came at the crossroads in musical styles that had begun in the age of Mozart and ended in the Liszt era with whom he played duets. His name, if not his music, did live on in London, where he spent much of his life and was involved in publishing and the sale of pianos. His eighty-four teaching studies are here recorded for the first time, though it is reported that they were used as tutorial material by such eminent names as Beethoven and Clara Schumann. There were many publications that followed their first appearance, Busoni being just one of the pianists who edited the original scores. Though generally brief—only one exceeding two minutes—they make considerable technical demands as they pass through various keys and tempos that engender the fundamental requirements and skills required. Busoni used the genesis of eight in his seventh Klavierubung described as ‘Eight Etudes after Cramer’, and are here added to complete the first disc, each disc containing two books of Cramer’s studies. Recorded in Italy last year the sound quality is very pleasing. 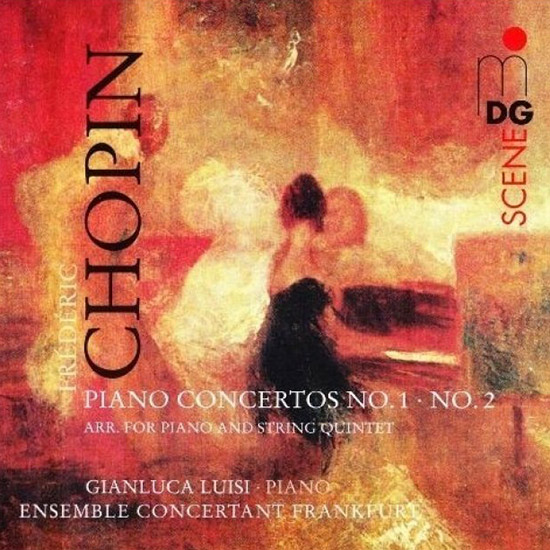